Through June 2013, Croom continued to provide for his offspring by foraging out from his nest area east of Brooksville, Florida. On 2 July, he shifted his activity to an area three miles north, suggesting that the juvenile, which had been on the wing for a month, had become less dependent. This is a time when adults and their young gradually part and join other Swallow-tailed Kites in daily feeding aggregations and communal night roosts, all in preparation for their imminent southbound migration.

On the night of 6 July 2013, 25 months and well over 25,000 miles of flight after being tagged, Croom’s satellite transmitter abruptly stopped providing data. ARCI biologists began searching for signs of his remains, the transmitter, or an encounter with a predator based on the last week of nighttime GPS fixes. They also looked closely at all the Swallow-tailed Kites they could find foraging in the broader area, but they did not see a kite carrying a transmitter. The crew also talked with local landowners where Croom had been roosting at night, but none had noticed any Swallow-tailed Kites in the previous week. 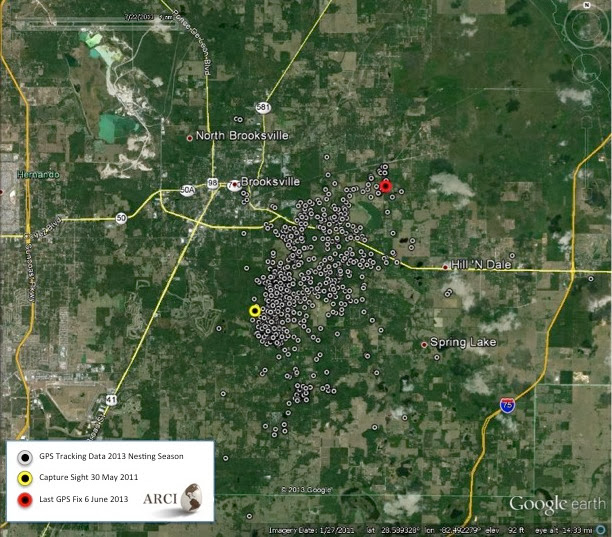 There are several reasons why we might stop receiving transmissions from a bird we are tracking: a dead storage battery, premature transmitter failure, harness failure, a broken antenna, or mortality. The batteries in these solar-powered transmitters last over five years, and we have never recovered a Swallow-tailed Kite’s transmitter with evidence of harness failure or a damaged antenna. Complete transmitter failure has been extremely rare for these sophisticated devices and we have not confirmed one such case in the last 14 years.

We can never be certain of what happened when we fail to find physical evidence following the loss of a bird’s signal, but in this case we believe the most likely cause was predation. There is substantial evidence from our studies and those of Dr. Jennifer Coulson in Louisiana that Swallow-tailed Kites — adults, nestlings, and fledged young — are vulnerable to attacks by Great Horned Owls while on their nests (e.g., incubating or brooding females; unattended young about to fledge) and in night roosts. In 2011, we began a companion project to our kite research to learn more about Great Horn Owl ecology and the factors that might reduce or aggravate the kites’ vulnerability to this powerful predator, which seems to be increasing in number in our study areas.

It always comes as bad news when we lose a marked bird. We certainly considered this when we chose to showcase the day-to-day life and movements of a single Swallow-tailed Kite. On the other hand, the goal of our research is to identify the factors that limit bird populations and, especially, how we humans can reduce the ways in which we compound these natural challenges with our own impacts on the earth. Every marked bird of every species we have tracked has provided remarkable insights vital to conservation — new knowledge from every single one. We remember this each time we accept the privilege of attaching a transmitter to a bird.  Sharing their stories with you is one way we can thank them for their contributions.

ARCI continues to track eight other Swallow-tailed Kites tagged in 2011 and 2012 in South Carolina, Florida, Mississippi, and Louisiana. We will begin positing updates on their movements as the migration season unfolds.
Posted by Amanda Powell at 11:22 AM