An overview of all kites. 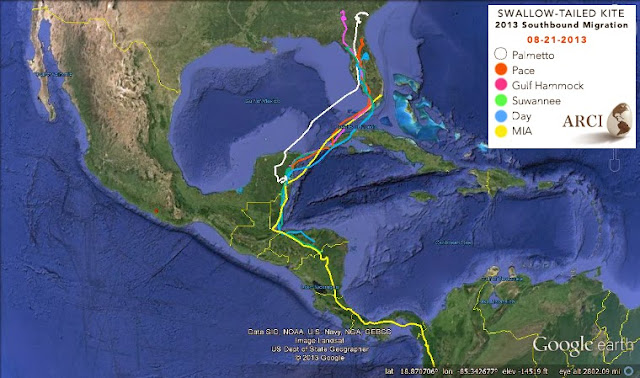 Palmetto remains on stopover in the Sian Ka’an Biosphere Reserve, the largest protected area in the Mexican Caribbean.

After Pace made landfall on Cuba, he stayed for two days then continued his journey south at 10:00 a.m. on Aug 11th. For 5 hours he flew over the water until he reached the Yucatán Peninsula just 10 miles south of Cancún. Pace’s last recorded location shows he is now 50 miles north of the border of Belize.

Gulf Hammock is making her way through the Yucatán Peninsula.

After a week long stopover, Suwannee is on the move again. Heading south, she made her way slowly through Quintana Roo, hugged the eastern coast of Belize, and entered Guatemala via a 4hr over-water shortcut over the Amatique Bay on Aug 13th. She pressed onward through Honduras and is now just across the border into Nicaragua.

Day is also on the move again after spending 6 days in the southern part of Quintana Roo, Mexico. It looks like she and Suwannee may nearly have been travel partners for a few days as they departed Quintana Roo and moved south through Belize—they have very similar tracks and the same general locations on the same days from the 9th through the 14th of August. Their paths diverged in Honduras where Day has remained at the Sierra de Agalta National Park.

MIA is in Colombia and has approached the Andes Mountains. This is another treacherous part of the migration route. He is following their western edge and the last GPS fix shows he is holding over in the Tatamá National Park.
Posted by Amanda Powell at 11:32 AM