It’s been an exciting migration season for the 11 Swallow-tailed Kites we’ve all been following. Most have returned to their breeding-season homes. This is the first recorded 10,000 mile round-trip journey for several of the kites, and we feel honored to have the opportunity to share it with you! Let’s catch up with everyone and see what they’re up to:

Two blogs ago, Sawgrass, Apopka, and Wilson were poised at the northeastern tip of the Yucatan Peninsula to cross the Gulf of Mexico.

Wilson was first, leaving on 23 March and arriving in Panama City, Florida, on 25 March. He wasted no time gliding back to Palmetto Bluff, South Carolina, and was back near his previous nesting grounds by 29 March. Sawgrass followed next, departing the Yucatan on 25 March to regain solid ground east of New Orleans, Louisiana, on 27 March. She flew an almost identical route on her northbound migration in 2017. With a few short stops to snack along the way, Sawgrass traveled east along the coast, hopped across the Big Bend area of Florida, and reached St. Petersburg, Florida, on 7 April. As of late, her data show frequent movements between the Tampa and St. Petersburg areas. Sawgrass is not yet staying in one place long enough to suggest nesting, but she may choose to do so later in the season.

Apopka crossed last, leaving the Yucatan Peninsula on 30 March and ending up south of Lafayette, Louisiana, on 1 April. He wiggled his way back east, reaching the vicinity of Apopka, Florida, on 9 April. He is staying local, and is currently in the Altamonte Springs area. 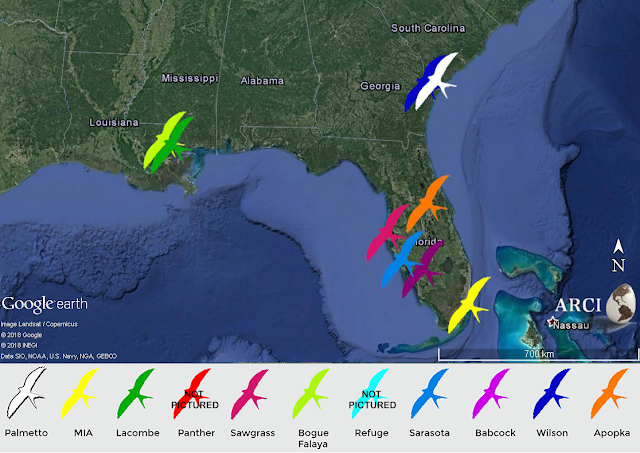 Babcock is back on territory at the Babcock Ranch in Charlotte County, Florida. Not far to the northwest is Sarasota, a homebody on Myakka River State Park in Sarasota County, Florida. Both birds are sticking to small, localized areas, suggesting possible nesting behavior.

Palmetto has returned to Palmetto Bluff, South Carolina, for the seventh time since her tagging. She arrived home on 14 April, 15 days before Wilson, and her data are clearly suggesting nesting behavior. Even though she and Wilson are using overlapping areas, they don’t seem to be cozying up to each other at the same nest site.

Lacombe is residing in Louisiana between the cities of Slidell and Lacombe. This is his third year nesting in this area. He’s not far from Bogue Falaya, whose transmitter stopped on 16 March, shortly after he reached Louisiana after crossing the Gulf of Mexico. A few weeks went by without data. We feared the worst, as winds had delayed Bogue Falaya over the Gulf for longer than we would like. But then Dr. Jennifer Coulson, President and Conservation Chair of the Orleans Audubon Society and the woman who fitted Bogue Falaya with his transmitter, wrote to us saying she has seen him at his former nesting grounds near Pearl River, Louisiana, safe and sound.

If you were to look at MIA’s data, it would show him in Honduras. His transmitter has failed after 6 long years of detailed, captivating data. With a guaranteed lifespan of three years, we were impressed his transmitter endured for twice that time, and knew the units could expire at any time. Thankfully, we know from our dedicated and wonderful volunteers that he is nesting again in Miami, Florida! He was spotted copulating and, more recently, tending to his mate while she incubates the nest.

The whereabouts of Panther and Refuge are unknown. We last heard from them in early February and late January, respectively, when they were still in Brazil and just starting to move northward. Last year, we experienced long data lags for Panther, so we are hoping both birds are doing fine. Our colleagues at the Florida Panther National Wildlife Refuge are keeping close watch for kites carrying transmitters. We also have to remember that the GSM (cell phone) devices they are carrying have an expected life of just under 2 years. This could explain the lack of data for Panther, tagged in 2016, but not Refuge’s silence.

As for most adults in the U.S Swallow-tailed Kite population, these tracked birds probably are now doing their best to contribute to the next generation of Swallow-tailed Kites. It’s hard work building a nest, laying eggs, protecting against predators, and raising young.

If you detect Swallow-tailed Kite nesting activity please report it to our sightings page.

We hope you’ve enjoyed this Swallow-tailed Kite Northbound Migration blog series and look forward to sharing news on the kites’ southbound movements in the fall.

Posted by Amanda Powell at 4:58 PM 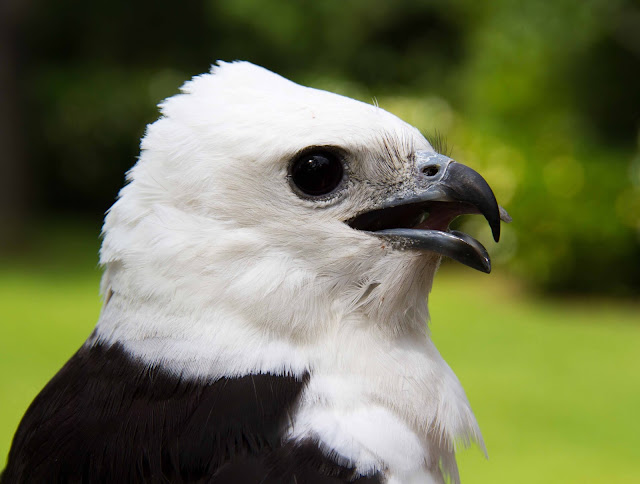 Bogue Falaya, the Swallow-tailed Kite tagged in Louisiana in May 2016 by our project partner, Dr. Jennifer Coulson, is no longer transmitting. For reasons unknown, the last GPS fix we received showed him in the Florida Panhandle between Crawfordville and Panama City on 16 March 2018.

Each year we see Swallow-tailed Kites struggle to cross the Gulf of Mexico, especially in the face of unfavorable weather conditions. Northerly winds held Bogue Falaya over the Gulf of Mexico for almost three days; still he reached Florida on 12 March. We speculated he may have been weakened by the extended crossing, suffered fatal effects of extreme dehydration, or fallen victim to predation (by chance, or as a result of being debilitated). Transmitter failure was another possibility.

Weeks went by with no data. On 11 April, we got word from Dr. Coulson that Bogue Falaya is back on his nesting territory in Lousiana! His transmitter has simply failed. We're relieved he is safe and sound.

Sawgrass, Wilson, and Apopka Check In

When we last reported  on Sawgrass, Apopka, and Wilson in February, they were still in Brazil. A five week lag in data delivery as they traveled through the remote Amazon region of Brazil and Colombia’s Andes Mountains left us anxious for news until 17 March, when their data stream resumed. We were relieved to learn that Wilson was safely in Nicaragua, Sawgrass in Panama, and Apopka in northern Colombia. The transmitters store each kite’s movement data while the birds are beyond range of cell-phone towers, then download the backlogged locations once their signals are detected. 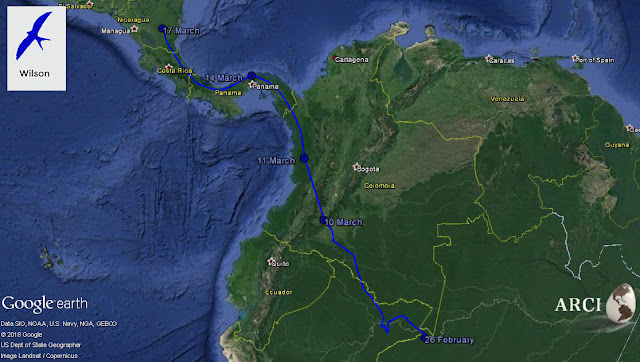 After fueling up one last time in early March on the border of Brazil and Peru, Wilson passed from Peru to Colombia. He made short work of the Andes Mountains in Colombia, crossing in just 30 hours. On 12 March, he quickly navigated through Central America, cruising through Panama in three days and Costa Rica in one. When Wilson came back online on 17 March, he was near the small town of San Ignacio in Nicaragua. 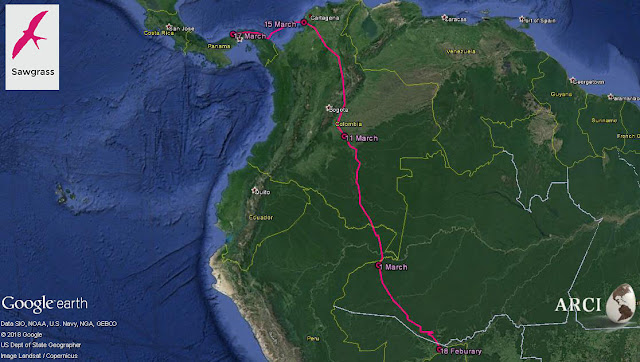 Sawgrass reached the State of Acre in western Brazil by 18 February, and by 1 March had left Brazil behind for Peru and Colombia. Our tagged Swallow-tailed Kites usually cross the Andes Mountains many miles south of Bogota, Colombia. Perhaps due to the winds on 11 March, Sawgrass chose instead to remain east of the Andes as she flew northward, eventually entering the mountains east of Bogota as she traversed the Andes on a north-northwesterly heading all the way to the Caribbean coast at Cartagena, Colombia. By 17 March, Sawgrass was halfway through Panama. 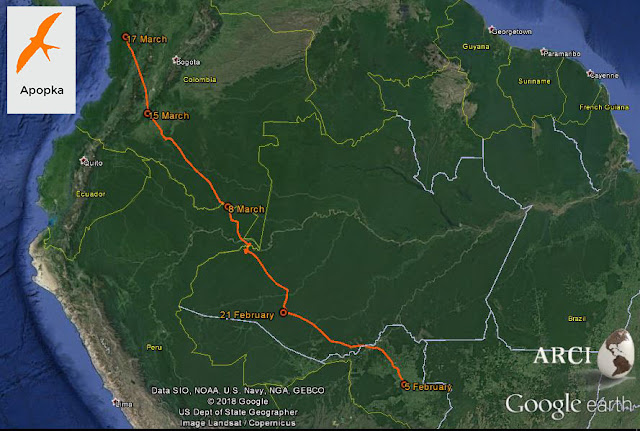 By early February, Apopka was in the state of Rondonia in western Brazil. He made her way out of Brazil by the end of the month, crossing through Peru and into Colombia in early March. Apopka reached the foothills of the Andes by 15 March, then crossed these imposing mountains in 2 days, settling onto the Pacific coastal plain by the 17th. 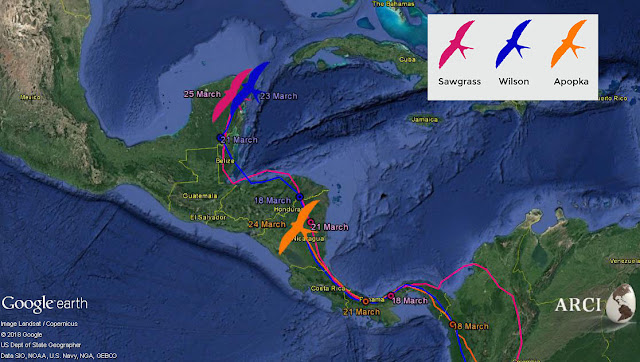 Since then, we have received regular data from all three kites. Wilson crossed into Honduras on 18 March and took a well-used short cut over the Gulf of Honduras to bypass Guatemala. By 23 March, he was perched near the coast of the northeastern Yucatan Peninsula, about to cross the Gulf of Mexico. Sawgrass stopped very little after leaving Colombia, passing through Panama in three days. She then covered Costa Rica in one day, zipped through Nicaragua on 21 March, and reached the Yucatan Peninsula by 25 March. After reaching central Panama, Apopka’s route was nearly identical to that of Sawgrass and Wilson. He toured Costa Rica and was in Nicaragua on 24 March, when he last checked in.
Posted by Amanda Powell at 7:50 AM