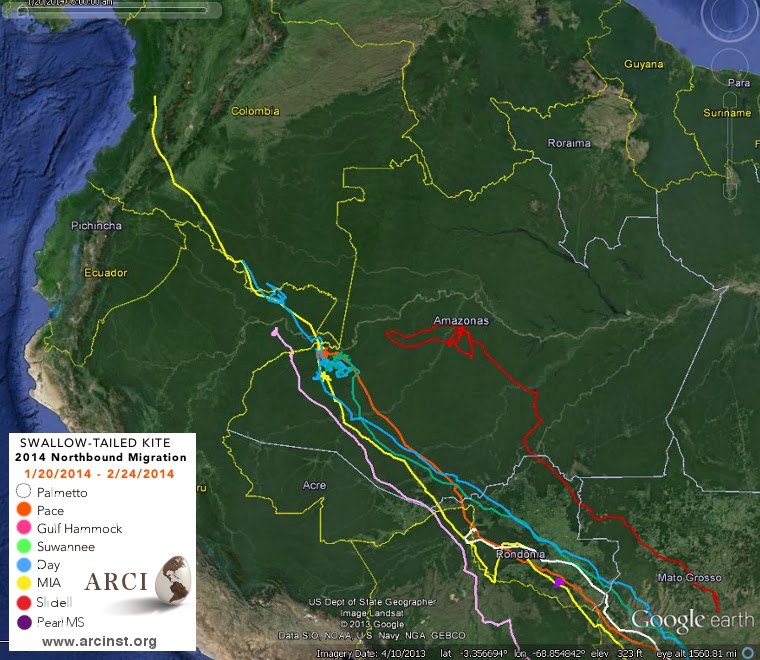 MIA is making headway through Colombia, crossing a challenging obstacle along the migration route, the Andes Mountains.

Day, also in Colombia, broke from the pack at the Peruvian border and is 460 miles south of MIA.

Still in Amazonas, Brazil, just south of the Peruvian border, are Suwannee and Pace, feeding over productive floodplain forests.

To the east 330 miles, Slidell also remains on her foraging grounds in Amazonas, Brazil.

500 miles south is Palmetto, slowly making her way through the state of Rondonia, Brazil.

PearlMS continues to hold closely to his winter range.
Posted by ARCI at 4:21 PM 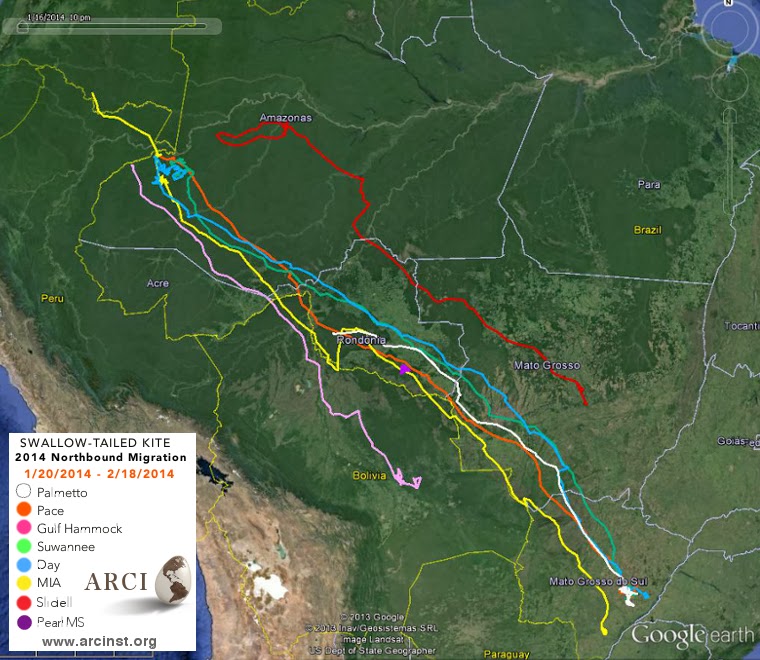 As of 17 February, MIA has taken the lead among the eight satellite-tracked kites. He skipped through the northeastern corner of Peru and is just across the border into Colombia.

Two hundred and fifty miles back are Gulf Hammock, Day, Suwannee and Pace. They are deep in the Amazon River Basin where Brazil, Peru and Colombia nearly converge. They seem to have slowed down here for the last five to ten days, where resting and foraging conditions may be optimal, giving them an extra boost for migration.

Also in Brazil’s Amazon River Basin, is Slidell. She has paralleled the group to the northeast, however she broke out to the west for 200 miles only to turn back around and end where she started. This area appears to be a stopover site 60 miles south of Rio Solimoes.

Palmetto is steadily progressing north and is in the western part of Rondonia, Brazil.

PearlMS remains on his winter range in southern Rondonia, Brazil.

WHICH KITE ARE YOU WAITING FOR?!
Posted by ARCI at 3:25 PM

Day and Slidell are about tied for first place on their northbound migration. Both are in the Brazilian Amazon Basin, but Slidell has taken a more eastern route.

Most of the eight kites we are tracking by satellite are still in Brazil. The exceptions are Gulf Hammock, moving north through Bolivia, and MIA, which has taken a southward turn into Bolivia, where he appears to be following the Mamore River. Along the way, he passed through Rondonia Brazil, where Pearl MS has been wintering.

Pace is migrating over the floodplain of the Guapore River, which serves as the border between Bolivia and Brazil.

Palmetto remains the farthest south of the eight northbound satellite-tracked kites. On February 4th, she began her northbound passage over the Pantanal, 350 miles of expansive wetlands.

Pearl MS is the last kite to begin migrating but his winter range was the most northerly of all the kites' ranges.
Posted by ARCI at 3:25 PM

Five of our eight satellite-tracked birds have started heading north from their winter ranges in Brazil. This last leg of spring migration always is the fastest, driven perhaps by the urgency of regaining former nesting territories and mates in the southeastern U.S.

These are the five northbound kites with departure dates and northbound distances travelled thus far:

Three of the five northbound kites - Day, Suwannee, and Pace - had been using the same night roost in Brazil for at least the last month (along with Palmetto, still in Mato Grosso, Brazil). The tracking data indicate that Pace and Suwannee spent most of their first northbound day together before Suwannee shifted east to a parallel route. Day is in the lead, having already reached the state of Rondonia, Brazil.

In addition to Palmetto, Pearl MS and Gulf Hammock are still on their winter ranges in, respectively, Rondonia, Brazil and eastern Bolivia.

As we wait to see which bird will be first to reach its habitual breeding area in the U.S., we also are watching the weather. March of 2013 brought an unprecedented period of strong, nearly relentless northerly winds. Three of the 11 Swallow-tailed Kites we were tracking at that time apparently died after battling headwinds over the Gulf of Mexico for three to four days.
Posted by ARCI at 1:26 PM