We are currently tracking eight Swallow-tailed Kites from nest sites in the Southeast. We have been documenting the southbound migration of six of these birds that were tagged in Florida and South Carolina. The other two birds, tagged in Mississippi and Louisiana, are part of a collaborative study between ARCI and Jennifer Coulson of the Orleans Audubon Society. Dr. Coulson is studying the geographic range, population size, and limiting factors for Swallow-tailed Kites in Mississippi and Louisiana. Together, we are learning about the differences in migration routes used by eastern versus western subpopulations, which you can see portrayed on today’s tracking map. Today, we introduce Slidell from Mississippi and Pearl MS from Louisiana. In our next post we will detail the differences in their migration routes as compared to the 6 birds of the eastern population. We thank Dr. Coulson for joining the 2013 Kite Migration Blog. 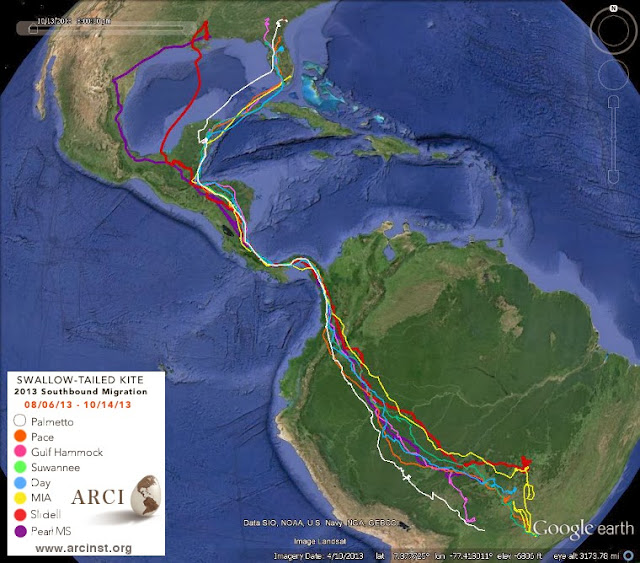 Slidell’s journey north this past spring was “epic,” Jennifer says. On 10 March 2012 she left the Yucatan, heading north across the Gulf of Mexico for her breeding grounds in Louisiana. On March 11th, when she was about halfway across the Gulf, she encountered persistent headwinds related to an unusually large high-pressure system. After a night with virtually no progress, Slidell did an about face and used the favorable tailwind to return to Mexico, arriving south of Veracruz on March 12th after a remarkable 42 hours over the water.

Rather than resuming her northbound migration when she reached shore, Slidell spent over 20 days in Mexico, probably recuperating from the struggle she faced over the water. In early April, she began heading north again. However, when she arrived to her breeding area on April 11th, her previous year’s nest was already occupied. Rather than nesting elsewhere, Slidell made long excursions through the Gulf Coastal states during the breeding season, perhaps in search of her past mate or a new one. On July 30th, she began flying south from Louisiana’s Atchafalaya Basin, crossed the Gulf of Mexico, and arrived in Campeche, Mexico, on August 1st.

She spent almost 20 days along the northwestern border of Guatemala at a refueling site. Since then she moved steadily through Central and South America where she is now in the State of Mato Grosso north of Juara. She is the most northeastern of all of our 8 GPS-tracked kites.

Pearl MS (male) - tagged in 2011 on the Mississippi side of the Pearl River northwest of Picayune
After his 2013 nesting attempt failed, he remained on his home range for most of the remaining breeding season, unlike the wanderer, Slidell. By 8 August 2013 he had moved to a communal night roost on the Bogue Chitto National Wildlife Refuge, and by mid August he also was using known roost sites on the nearby Old River Wildlife Management Area in Pearl River County.

Pearl MS had the latest departure of our tagged migrants beginning his southbound migration from the Pearl River Basin on August 16th. He also has had the most unique migration route following an overland route completely around the Gulf of Mexico and staying well inland, unlike most tagged kites that usually navigate closer to the coast on both their northbound and southbound migrations through Mexico. Once in the state of Tamaulipas he joined the coast southward. Ten days later he was in southern Nicaragua where his track merged with the others. Now Pearl MS is in the state of Rondonia near Nova Brasilandia d’Oeste.

Update on Palmetto, Pace, Gulf Hammock, Suwannee, Day and MIA
All kites have crept southwest since our last post. From the end of September to the middle of October Swallow-tailed Kites arrive to their wintering grounds where they’ll stay through January.

Palmetto and Gulf Hammock have diverged into Bolivia and are 190 miles apart in the State of Santa Cruz.

Day is in the middle of the pack. She is in the State of Mato Grosso near Sapezal.

MIA has taken some time to wander north and south between Mato Grosso and Mato Grosso do Sul but it seems he has found foraging areas close to two of our other migrants Pace and Suwannee.

Pace, Suwannee, and MIA are on ranchlands east of Campo Grande in Mato Grosso do Sul.