On 6 August 2012, exactly one year to the day of the start of his 2011 southbound migration, Croom again departed the U.S. for South America. He took just over two months to reach his previous year's wintering area, where he stayed for three months. After starting north in mid-January 2013, Croom took just over a month to reach the Yucatán Peninsula from which he departed on 25 February 2013 in mid-afternoon. Flying through the night, he reached New Port Richey on Florida's Gulf coast after 23 hours over the water. Without stopping to rest, he continued flying toward his 2011-2012 breeding area, arriving before dark that same day, 26 February 2013. Croom is currently supplying food to two nestlings at his territory on private land, less than 3 km from his 2012 nest site. 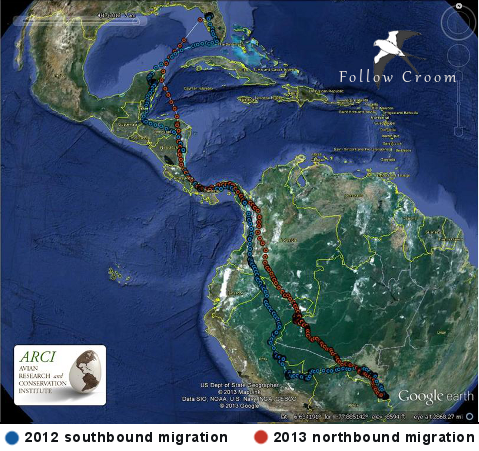 Croom, a male Swallow-tailed Kite, was tagged as an adult on 30 May 2011 on private property in Hernando County Florida, six miles southwest of the Croom tract of the Withlacoochee State Forest. We do not know if he nested that year. Croom departed Florida on 6 August 2011, flying first from Cape Sable (extreme southern Florida at the seaward tip of the Everglades) to western Cuba, then to the Yucatán Peninsula. 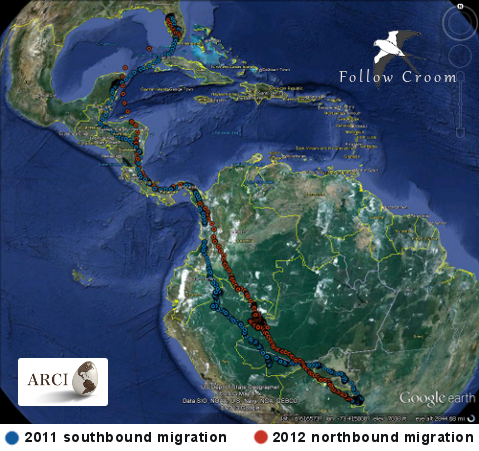 He spent over two months making his way to the northern edge of the U.S. population's winter range, near the border of Bolivia and Brazil, where he stayed for three months before beginning his northward migration in mid-January 2012. His return trip was quicker, under two months. From the northern tip of the Yucatán, he crossed the Gulf of Mexico in the late hours of 3 March 2012, arriving in the U.S. by mid-afternoon 15 hours later.  From there, Croom took two days to return to his 2011 territory where he nested in 2012.

Check back next week for an update on Croom's 2012/2013 migration and his current location. The headwinds were strong this past February as Croom flew across the Gulf to get to his Florida territory, but he did make it back to Florida safely.

As we catch up with Croom's current status, we look forward to sharing more natural history stories from his life. We are also working on getting a photo of him soon!
Posted by Amanda Powell at 11:20 AM

Croom: The life of one Swallow-tailed Kite

For over a decade, ARCI has been at the forefront of tracking birds through cuttine-edge technologies. Documenting birds' movements allows scientists to better understand their behavior and make well-informed conservation decisions. But beyond the data points lies a story that fascinates and inspires. We invite you to share this story as we follow the life of one Swallow-tailed Kite tagged near the Croom tract of the Withlacoochee State Forest in central Florida—a bird that we have followed for over 20,000 miles during the last two years.

Who is Croom? Stay tuned to find out! 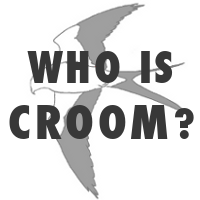