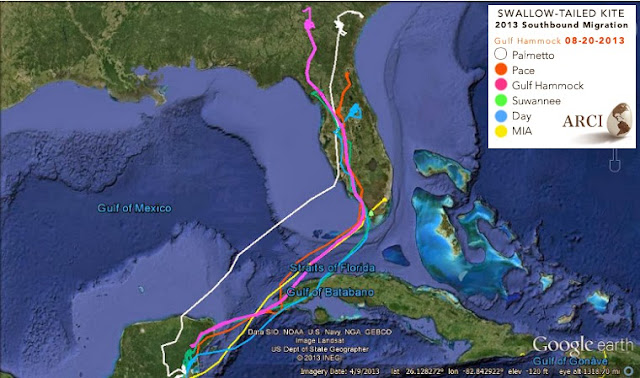 Gulf Hammock is our last Florida-tagged Swallow-tailed Kite to leave the US. She was the only kite to fly north (from Florida to Georgia) to stage for migration. She left her comfy corner of the Ocmulgee River in Georgia, where she spent a month and five days, and headed south where she stayed the night in the Steinhatchee Conservation Area in Lafayette County, Florida. The next night she roosted in the Green Swamp where Pace and Palmetto also stayed over. She spent her last sleeping hours in the U.S. in the Everglades just south of Chokoloskee, Florida. Setting up for departure, she followed the coastline and as the day’s light grew dimmer, she jumped off over Florida Bay from Cape Sable on August 13th. She spent most of the night over the Straits of Florida and made it to Cuba at around 4am. She didn’t stop, however, but continued to head out from the western tip of the Island on a 5 hour over-water trek to Cancun. Gulf Hammock has stopped in Quintana Roo, 30 miles NW of Tulum. Suwannee, Day, Palmetto and Pace are also in Quintana Roo.
Posted by Amanda Powell at 11:32 AM