We are currently tracking eight Swallow-tailed Kites during their southbound migration to wintering grounds in Brazil and Bolivia. Over the next few weeks we will document six of the kites which were tagged in South Carolina, Georgia and Florida. 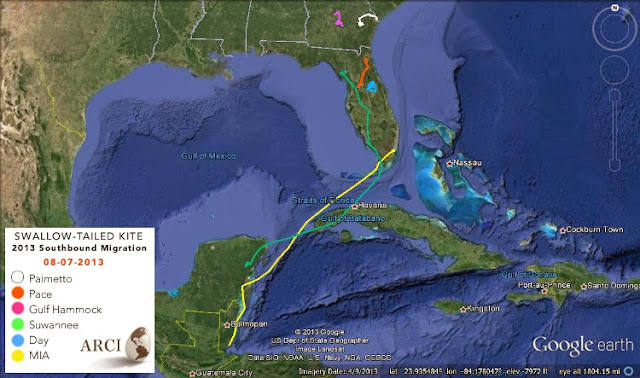 Palmetto (Female) - Tagged in Palmetto Bluff, South Carolina.
Still joined with other Swallow-tailed Kites in foraging flocks near the Altamaha River in Georgia.

Pace (Male) - Tagged south of Jacksonville, Florida.
Continues to spend his days fueling up in the Wildwood, Florida, area. This is the area at the intersection of I-75 and the Florida Turnpike where you can often see Swallow-tailed Kites overhead.

Gulf Hammock (Female) - Tagged in Levy County, Florida.Departed her Florida nesting area on July 4th and headed north to her pre-migration staging area in Dodge County, Georgia, near the Ocmulgee River. This is the third year in a row she is using this pre-migration area.

Suwannee (Female) - Tagged at the Lower Suwannee National Wildlife Refuge.
Suwannee was our first kite to leave the U.S. this year. After leaving peninsular Florida she made her way across Cuba and continued southwest to Quintana Roo, Mexico. Eighteen hours after her Florida departure, she finally stopped near the town of Guanajay, Mexico to rest and replenish her fat reserves.

Day (Female) - Tagged in Daytona, Florida.Still near the St. Johns River and making daily feeding trips to the north shore of the Lake Apopka Restoration Area, where a large foraging aggregation of Swallow-tailed Kites forms every year.

MIA (Male) - Tagged in south Miami, Florida.
MIA, the city bird, has taken off suddenly. Unlike Suwannee, he skipped passing over Cuba and came ashore at the Sian Ka’an Biosphere Reserve, a UNESCO World Heritage Site, on the Yucatán Peninsula. With a northerly tailwind, he continued all the way until he reached southern Belize.
Posted by Amanda Powell at 11:25 AM