There are now three Swallow-tailed Kites that have departed the U.S. (Suwannee, Day and MIA) and three that remain (Palmetto, Gulf Hammock and Pace). It appears that Gulf Hammock, the only kite that flew north to stage for migration, will be the last bird to exit the country. 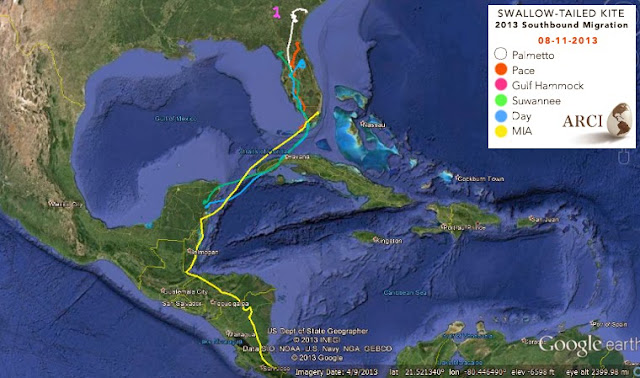 Palmetto (Female) - Tagged in Palmetto Bluff, South Carolina.
Palmetto has started her southbound migration. After leaving her South Carolina home, she made it to Gainesville, Florida, (She must have wanted to see us at ARCI!) where she stayed the night in a neighborhood to the northwest of town. She arose in the morning and continued south until she reached the Green Swamp where she stayed and roosted for the night. This is the same area Pace also stayed a night.

Pace (Male) - Tagged south of Jacksonville, Florida.
Pace has launched from the Florida mainland! After spending a night in the Green Swamp, then a night in Big Cypress National Preserve, he went offshore at Cape Sable, Florida. His radio has turned off to recharge and the last GPS fix we received from his transmitter showed he was over the water north of the Florida Keys.

Gulf Hammock (Female) - Tagged in Levy County, Florida.
Gulf Hammock is still on the Ocmulgee River south of Abbeville, Georgia. Unlike the other kites we are tracking, Gulf Hammock flew north (from Florida to Georgia) to stage for migration. This is the third year in a row she is using this pre-migration area.

Suwannee (Female) - Tagged at the Lower Suwannee National Wildlife Refuge.
Continues to stay at her stopover site in the Parque Nacional de Quintana Roo. She has been there since July 29th. This is classic stopover behavior similar to what Gina Kent found with her thesis work on the studies of the annual cycle of the Swallow-tailed Kite.

Day (Female) - Tagged in Daytona, Florida.
Day made it safely across the open water and reached Mexico! (At the time of our last post, her radio had turned off to recharge while she was still over the Straits of Florida, south of Marathon Key.) Her route out of the U.S. and to Mexico was very similar to Suwannee’s—she departed from Cape Sable, flew over Cuba and came onshore at the Yucatán Peninsula. She continued until she reached the same area near Tulum where Suwannee also remains on stopover.

MIA (Male) - Tagged in south Miami, Florida.
After moving quickly through Belize, Guatemala and Honduras, MIA arrived to Nicaragua and stayed for a short time. He is moving again. He left Nicaragua, and is now 13 miles west of Limón, Costa Rica.
Posted by Amanda Powell at 11:28 AM