Transmitter Technology and a Focus on the Kite, Pace

During each day, solar energy recharges the on-board batteries of the GPS-equipped satellite transmitters we use to track Swallow-tailed Kites (these devices are made by Microwave Telemetry, Inc.). The GPS receiver on the transmitter collects eight fixes at set times every 24 hours, mainly during daylight. For eight hours every other day, the transmitter uploads the GPS fixesto orbiting satellites. The satellites promptly re-transmit this encrypted information to a commercial facility on Earth, which then processes and sells the data to us (at over $3 per day per bird – you can do the math).

Since our last post, all of the kite transmitters except one were off and recharging so they could send their GPS data to the satellites the next time they turned on. However, one transmitter, carried by Pace from Jacksonville, Florida, did turn on and beam its valuable GPS file into space. This is why we knew during out last update on August 11th that he was flying southwest across Florida Bay. 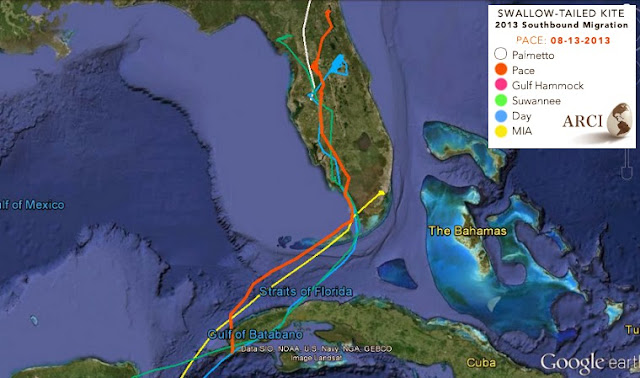 We will use this opportunity to zoom in on Pace’s story (SEE ORANGE TRACK). He left his nesting area near Jacksonville, Florida, on July 27th and joined other kites in a foraging aggregation near Wildwood, Florida. Pace traveled 12 miles each day between this feeding site and his night roost until August 5th, when he headed south on the first leg of his migration. On August 7th at 3:00 p.m., he slipped off shore at Cape Sable, the southern tip of peninsular Florida. At this point, Pace was committed to crossing the Florida Straits through the night, sailing southwest by alternately gliding slowly downward, then circling to regain altitude. Within 24 hours, he made landfall on the Guanahacabibes Peninsula of extreme western Cuba. We’ll see if he spends the night there and leaves in the morning for Mexico’s Yucatán Peninsula, 125 more miles across open ocean. Fingers crossed for favorable winds!
Posted by Amanda Powell at 11:29 AM