Another Swallow-tailed Kite makes its jump to the Yucatán. Palmetto left the Green Swamp in west central Florida and sailed off over the Gulf of Mexico in the early evening of August 7th. She launched from Pine Island in Lee County, Florida, significantly farther north than 4 of the tagged kites before her. She did not use Cuba as a stepping stone, but rather, flew a path over 500 miles of open water and did not make landfall until 29 hours after her Florida departure. In unfavorable winds, we have witnessed birds that were forced to stay on the wing for up to 3 days. Palmetto came ashore near Rio Lagartos, Mexico and at the time of her last fix for this map, she had flown inland and was nearing the border between the Mexican states of Yucatán and Quintana Roo. 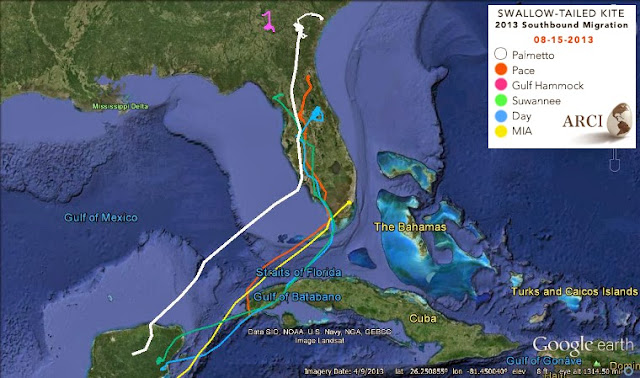