Croom and his mate have sucessfully fledged one young Swallow-tailed Kite. The juvenile began to edge out of the nest and onto neighboring branches on the 5th of June. By the 7th of June, the young kite was begging and being fed in the nearby trees. No less than 14 other Swallow-tailed Kites had been gathering in the evenings in this rural neighborhood. 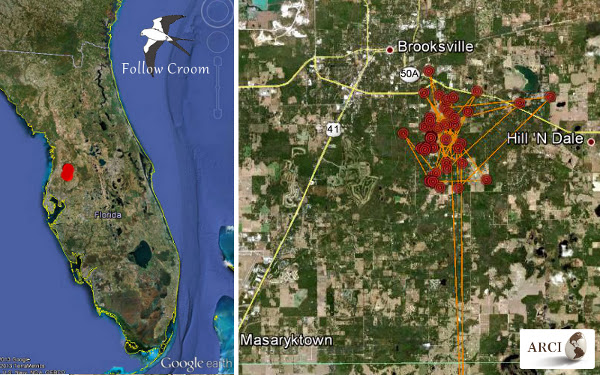 Croom spends his days foraging within 3 miles north and east of his nesting area.  He will start traveling farther as his offspring gets stronger and starts to follow him.  Last year he left his nest area around the 18th of July to join other kites in large communal night roosts, from which they forage in small flocks each day to fatten up on insects before starting their southbound migration.

We'll be watching to see if Croom is on a similar schedule this year.
Posted by Amanda Powell at 11:22 AM