When no news is bad news

We’ve come to grips with the fact that we are no longer getting satellite data from Bullfrog, a female Swallow-tailed Kite tagged in June 2015 in the Tampa Bay area of Florida.
On 8 March 2017, Bullfrog leapt out over the Gulf of Mexico from the northeastern tip of the Yucatan Peninsula just north of Cancun. At first, she traveled northward with a good tailwind, but a late-season cold front created forceful headwinds that quickly stalled any forward movement. On 10 March, west winds developed and Bullfrog quickly took up a downwind course toward Florida. She made rapid progress until the winds changed again, now from the north, while she was still 200 miles from Florida.  She flew at high speed for nearly another 200 miles – but southward! This leg took her almost to Cuba before she took the ever-changing winds westward to the tip of the Yucatan, from which she had departed 3 days before. We were relieved, at least, that Bullfrog was now within 25 miles of land, where she could rest before making another attempt to reach Florida.

However, our relief was short-lived.  Rather than going ashore, Bullfrog’s drive to reach home took her northwest, riding the wind back out into the Gulf of Mexico, until she was once again struggling with headwinds. At that point, over water more than 4 full days and nights, not even a strong tailwind could carry her to shore in time. Bullfrog’s last location was in the Gulf of Mexico, 270 miles from the closest land. Undoubtedly, many other Swallow-tailed Kites, and many thousands of birds of many other species – untagged and unnamed – met the same fate during this period. 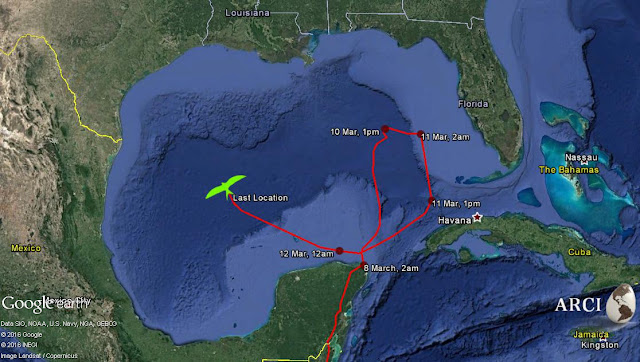 Bullfrog’s situation was, unfortunately, not unique. As we have learned from the similar scenarios that have played out for other Swallow-tailed Kites we were tracking, these birds cannot stay aloft more than 4 days without drinking or eating. In every case, large, unseasonable cold fronts resulted in persistent strong northerly winds, keeping these trans-Gulf migrants from reaching land in time. In 2013, three of the 11 Swallow-tailed Kites we were tracking died while laboring northward over the Gulf of Mexico in a similar weather pattern.

We celebrate Bullfrog today and the wealth of knowledge she provided over the last two years. She fledged two broods of two chicks each – the most any female kite ever accomplishes – during this time, and showed us her unique pre-migration route and communal roost sites through south Florida, her travel routes and winter destination, and all the places, from disturbed and degraded habitats to well-managed protected areas, that posed threats or served as refuges to her along her way.  We are grateful to the Florida Aquarium and its friends and supporters, especially Glory Moore and the St. Petersburg Audubon Society, for providing the necessary funding for Bullfrog’s transmitter and tracking data; and to Microwave Telemetry and CLS America for the technology to “see” into the lives of these amazing birds as they annually traverse the western hemisphere.

We also thank all of you who are reading this story for your enthusiastic interest, and for being concerned about the well-being of our planet and its wild inhabitants. We appreciate all you are doing, and all we hope you will consider doing, to ensure that our choices and actions do not further imperil the natural world.
Posted by Amanda Powell at 4:30 PM