At the liberty of the winds 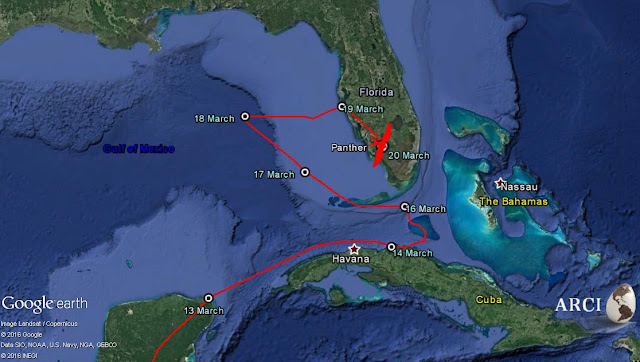 On 13 March, Panther had flown as far north as she could before crossing the Gulf of Mexico. She hovered on the coast of the Yucatan Peninsula in Mexico, faced with strong headwinds produced by the same unseasonably late cold front the late Bullfrog encountered. We hoped she would wait for the winds to calm, as we are all too aware how profoundly weather can affect a migrating Swallow-tailed Kite’s journey across the Gulf. Panther crept east out over the sea, skirting the north coast of Cuba before briefly seeking refuge on a barrier island north of Corralillo, Cuba. After a day of rest, she resumed her journey and made what appears to be an attempt at reaching Florida, just 100 miles north of her. Thwarted by winds from yet another cold front, she careened northwest until stalling over open water on 18 March. Finally, able to direct her path towards land, Panther reached Bradenton, Florida on 19 March. Despite having spent nearly 5 days over the Gulf, she wasted no time, settling back on her nesting grounds on the Florida Panther National Wildlife Refuge on 20 March. 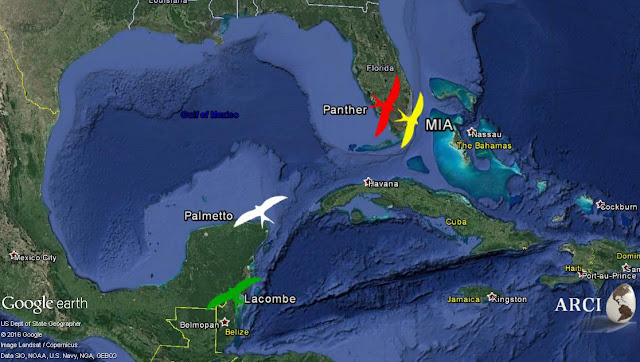 Palmetto from South Carolina, our longest-tracked kite, covered a significant amount of ground since we saw her enter Nicaragua on 14 March. She has passed Lacombe and will be the next kite to make the Gulf crossing. Southeasterly winds will be increasing in strength over the next two days, but should calm by Sunday morning. We wish Palmetto the best of luck.

The last time we heard from Sawgrass, she was still in South America in a region where there are few cell-phone towers to which her transmitter can download her accumulated GPS data. We aren’t worried yet. We experienced the same lapse in communication when Panther went through this entire area, not receiving data from her until she came online in Panama after 38 days of radio silence.

Not far behind Palmetto is Lacombe, a male Swallow-tailed Kite tagged in 2015 by our colleague Jennifer Coulson in Louisiana. Last year, he, like most of our satellite-tracked birds, migrated through the Gulf earlier in March and caught a lucky break that took him straight north to familiar grounds of Louisiana (see his path in "Sublime Creatures of the Wind"). What will his route look like this year?

MIA is already paired up and working on a nest in the Miami area.  We are hopeful that all the northbound Swallow-tailed Kites, tagged and un-tagged, will be back soon on the breeding grounds and beginning another annual nesting cycle
Posted by Amanda Powell at 12:20 PM