No where to go. How will our birds cope with Hurricane Irma?

In preparation for Hurricane Irma, we evacuated field sites in the Florida Keys and coastal south Florida, moved boats and field crew to northern latitudes, and fortified our homes. We know that many of our supporters and those who will read this blog have been affected by this massive storm and we hope that you stayed as safe as possible.

Of course, something we cannot personally protect from a hurricane are wild birds, including the ones we tag and study. Severe weather such as this presents us with interesting, unplanned opportunities.  With satellite, cell-phone, and old-fashioned radio tracking, ARCI is following 37 individual birds of seven species, a rare and valuable chance to learn how they weather this hurricane and respond to its profound impacts on the many habitats, special places, and landscapes that support their day-to-day lives. Some birds will perish in the extreme conditions. Some will lose resources essential in the near term, or suffer higher risks of mortality or impaired reproduction, long after the storm passes. Others may begin their seasonal migrations only to be forced to take up novel routes that prove threatening or take them to unsuitable wintering destinations.  Others may accomplish the impossible, against all odds, and survive in spite of the enormous scale of the damage, giving us some hope that wild birds will be resilient enough to cope with nature, and with all we do to jeopardize their continued existence.

The 37 birds telling us these stories are the ones we’ve carefully captured, tagged, and tracked with the support many of you have generously provided, including Swallow-tailed Kites, Snail Kites, Magnificent Frigatebirds, Reddish Egrets, Southeastern American Kestrels, White-crowned Pigeons, and a Short-tailed Hawk. 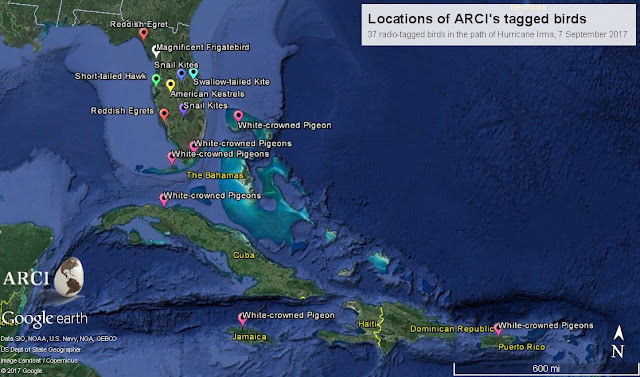 Most of our Swallow-tailed Kites are in Central and South America now, but there are some lingering in Florida, including “Apopka”, a cell phone/GPS-tracked bird that we featured in our last blog.  We hope Apopka was encouraged to begin migrating by the strong northern tailwinds on the leading edge of the advancing hurricane. We are watching closely and hope to have more for you soon.

Four of the seven species we are tracking in the Florida peninsula will not migrate: eight Snail Kites tagged in south-central Florida (satellite and VHF radio transmitters), a single Short-tailed Hawk fitted with a cell-phone/GPS device in St. Petersburg, six Reddish Egrets from coastal Lee and Dixie counties tracked with satellite/GPS technology, and four young Southeastern American Kestrels tagged with tiny VHF transmitters in Hillsborough County. We can only hope they will find a good perch and hang on, or take to the air and evade - or endure - the most extreme conditions. Although we do not know what strategies they employ, or which work best, we have learned from past experiences to expect some surprises when tracking birds that encounter exceptionally severe weather. For instance, we watched in 2016 as one of our tagged Magnificent Frigatebirds in the northern Gulf of Mexico off Citrus County, Florida, traveled very rapidly on winds generated by Hurricane Hermine to take refuge well inland in southern Georgia. We are eager to see how this same bird responded to Hurricane Irma.

Of all the birds we are presently tracking, we are most concerned about seven White-crowned Pigeons we tagged with satellite transmitters on their breeding ranges over the last three years for a range-wide study of this species of conservation concern. Two confronted Irma’s 180 mile per hour winds in Puerto Rico, two from Florida encountered the hurricane in northern Cuba, and two more had similar challenges in Jamaica and the Bahamas. The last remained in Florida. We will know soon how these birds have fared.

Just as Hurricane Irma began developing last week, we were in the process of placing small VHF transmitters (tracked by hand in real time) on 12 White-crowned Pigeons in South Florida and Keys. One purpose of this study is to link the most significant mangrove-island breeding colonies of these birds with their specific hardwood-hammock foraging destinations, thereby enabling wildlife managers to prioritize protection of the most important patches of this rapidly disappearing hardwood forest. Because these transmitters cannot be tracked remotely, the fates of these birds could remain a mystery for some time after Irma’s passage.

We hope you and yours safely endured Hurricane Irma, and that you will join us in hoping that as many birds as possible have done the same.