Go With the Wind; A Swallow-tailed Kite gets the best migration conditions

WOW! Apopka, the rehabilitated Swallow-tailed Kite with the GPS/GSM-transmitter, made it safely to Central America. Was Apopka lucky, or did it know a change in the weather loomed? We believe it was the latter. Birds detect variation in barometric pressure and other subtle weather characteristics, sensing change well before us humans. We believe Apopka was more ready than ever to begin migrating to South America, and the strong northern winds on the west side of Hurricane Irma came just at the right time.

Since 5 August, Apopka had been feeding, fattening, and preparing for 5,000 miles of migration in a remote portion of Brevard County, Florida. On 6 September, just three days before the brunt of Hurricane Irma ravaged the area, Apopka headed south. Hurricanes are low-pressure weather systems that circulate in a counter-clockwise direction. The immense size of this storm resulted in favorable winds over a large portion of Florida, and Apopka took advantage of the opportunity.

On the first night after leaving its roosting/foraging area in Brevard County, Apopka stayed in St. Lucia County, continuing to Big Cypress National Preserve for last day and night in the United States before leaving the Everglades and heading out to sea from Florida’s southwestern shore on 8 September. The winds were definitely picking up in advance of Hurricane Irma as Apopka crossed the Straits of Florida. It only took four hours, at an average speed of 30 miles per hour, to reach the northern coast of Cuba, near Veradaro. By this time, Hurricane Irma was a Category 5 Hurricane and just 200 miles away. 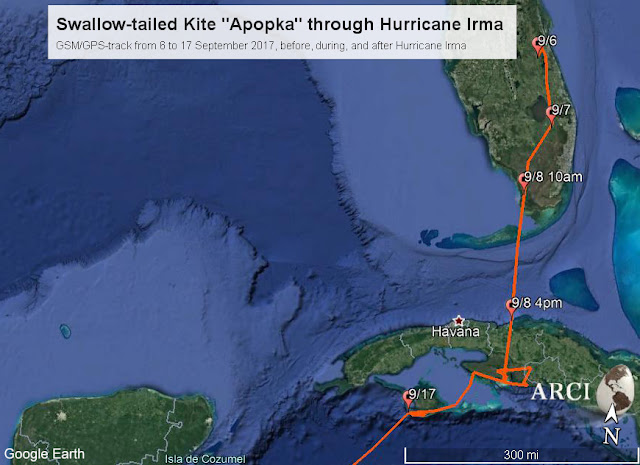 The sustained southbound winds carried Apopka across the width of Cuba to the southwestern part of the Zapata Peninsula, which is a large, protected natural area where swamp forests and wetlands meet coastal marshes. Twenty-four hours later, the eye of Irma passed over Veradero with sustained winds of  125 mph while Apopka, only 80 miles away, held tight through maximum winds of 50 mph.  Apopka stayed on the Zapata Peninsula through more stormy weather for seven days, then spent two nights on the Isle of Youth (Isla de Juventud) off the southwestern coast gaining strength and fat reserves to complete the ocean crossing to the Yucatán Peninsula.

Apopka made that final ocean crossing on 17 September with a safe landfall in the state of Quintana Roo, Mexico, 18 hours later. Having since followed tracks similar to all the Swallow-tailed Kites before it, it is already in Honduras. 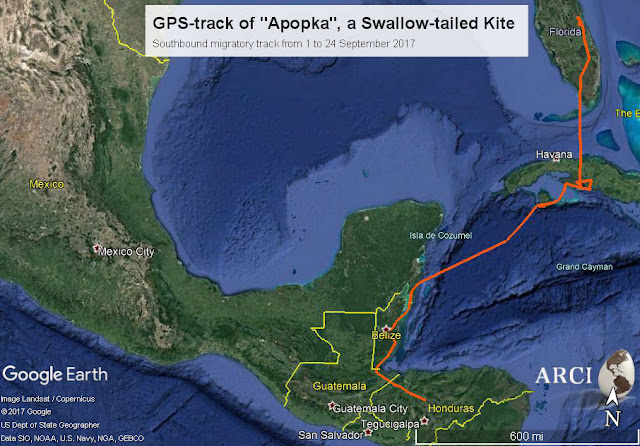 The hard part is over for Apopka, the remaining migration is all over land. This rehabilitated bird’s survival is a true success story with or without a major hurricane (see our blog posted on 1 September 2017). We are so happy that Apopka is doing well, and grateful to the rehabilitators at Avian Reconditioning Center for investing their time, resources, and practiced care in this once-injured Swallow-tailed Kite. We particularly thank Carol McCorkle and Paula Ashby.

Generous donations towards the cost of the tagging operation, transmitter, and data acquisition came from: