This has been a difficult nesting season for Swallow-tailed Kites and researchers. There were many nest failures, and COVID-19 greatly restricted our ability to find and monitor nesting kites. Here is a summary of what we have noted and suspect based on the results of ARCI’s GPS telemetry research, which we feel particularly fortunate to have in place.

Apopka once again enjoyed his summer without committing to a nest site. He spent most of his time around Longwood, Florida, a familiar area.

Location data from the beginning of the nesting season indicated that Pritchard, tagged on Palmetto Bluff, South Carolina, returned to and initially remained near his previously used home range at the beginning of the season, but suddenly moved to an area around a previously identified roost site several miles to the north, on the New River. Although this may have resulted from predation at his habitually used nest site, we have no way of knowing.

In Florida, we were grateful to several local land managers for field investigations of clusters of GPS locations on three properties:  Palm Beach County Environmental Resources Management lands, the Lower Suwannee National Wildlife Refuge (Levy County), and the T. Mabry Carlton Jr. Memorial Reserve (Sarasota County).  Recently used but vacant nests were observed on each of the territories of the tagged males PBC-ERM, Suwannee, and Sarasota. Given the timing, these observations suggest that all three nests failed prior to the time when fledging would have occurred, most likely due to predation. 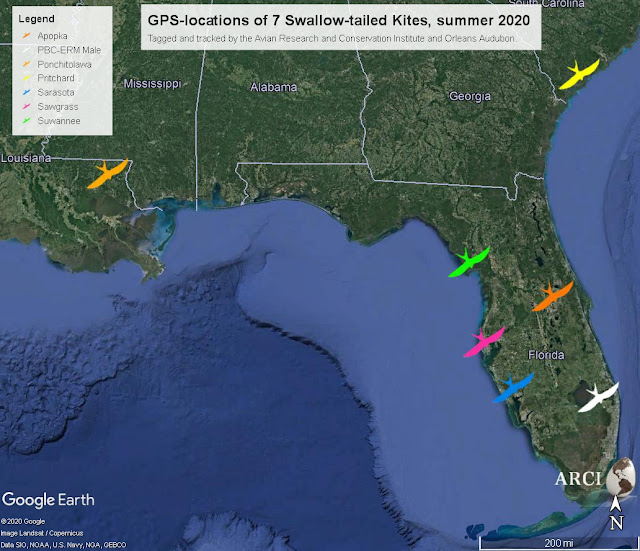 Female Sawgrass was spotted and monitored for nesting behavior by local naturalist Mia Majetschak, who had observed them nest building but was unable to detect the kites in the area a few days later.  Either the pair did not produce any eggs, or the eggs were depredated soon thereafter.

Based on our observations and those of others at nest territories that have been active in recent years, some Swallow-tailed Kites nested successfully this year. However, such success was not reflected among the sample of kites we are currently tracking.

Even when COVID-19 was not an issue, it has been impossible for ARCI’s small but experienced staff to visit and monitor the Swallow-tailed Kite nests throughout Florida. This is why we developed the Eyes on Kites nest monitoring program to which many of you have contributed.  Now is the time to finish up and submit your-nest fate forms.  If you knew of a nest site this year, we would love to have the location and final-outcome data for our Florida Kite Nest database, so please consider signing up and sharing your contributions through our form.

Thank you for all your sightings!  Together we can learn about keep up with nesting locations and success throughout Florida.
Posted by ARCI at 2:50 PM