In the southeastern United States, Swallow-tailed Kites are starting a 5,000-mile migration to South America for the winter. It will be the first time for the young-of-the-year, but their parents may have made this trip many times before.

ARCI is tracking twelve Swallow-tailed Kites with satellite and GSM (cell phone) telemetry as they begin this journey. Five newly tagged kites – two in Florida, one in South Carolina, and two in Louisiana tagged by our project partner Dr. Jennifer Coulson – received their transmitters this past summer.

This southbound half of their 10,000-mile migration cycle contributes fascinating behavioral, geographic, and habitat data to ARCI’s long-term tracking study of Swallow-tailed Kites. Palmetto, tagged in South Carolina in 2011, is beginning her eighth trip as a tagged kite! Who knows how many migrations these birds endured before they carried these sophisticated, solar-powered transmitters?

The ultimate goal is to reach Brazil. To get there, most of the tracked kites leave from the southern tip of Florida for the eastern shore of Mexico’s Yucatan Peninsula, passing over or near the western portion of Cuba. The Swallow-tailed Kites from Louisiana usually follow the Gulf coast of Texas into Mexico. Although we might think the over-water route would be far more dangerous, 22 years of remote tracking shows that both pathways are relatively safe. However, weather and other unknown factors cause a few Swallow-tailed Kites to take different and sometimes riskier routes.

The birds usually linger for a short time in the bountiful tropical forests of Mexico, Guatemala, or Belize before continuing southward. Unlike other raptors, such as Red-shouldered Hawks and Bald Eagles, Swallow-tailed Kites catch and eat their prey without missing a wingbeat. They pluck dragonflies and beetles out of the air and swipe anoles and frogs from the treetops, devouring everything without needing to land.

The whole southbound trip may take a Swallow-tailed Kite anywhere from 8 weeks to 3 months. For the most part, they don’t rush. Instead they move at a slow but persistent pace, feeding as hunger and food availability dictate until reaching their wintering destinations. Unlike their northbound migration, when mates and a short nesting season await them, their southbound journey seems unhurried.

As of 13 August 2018, eight tracked Swallow-tailed Kites had started their migrations: 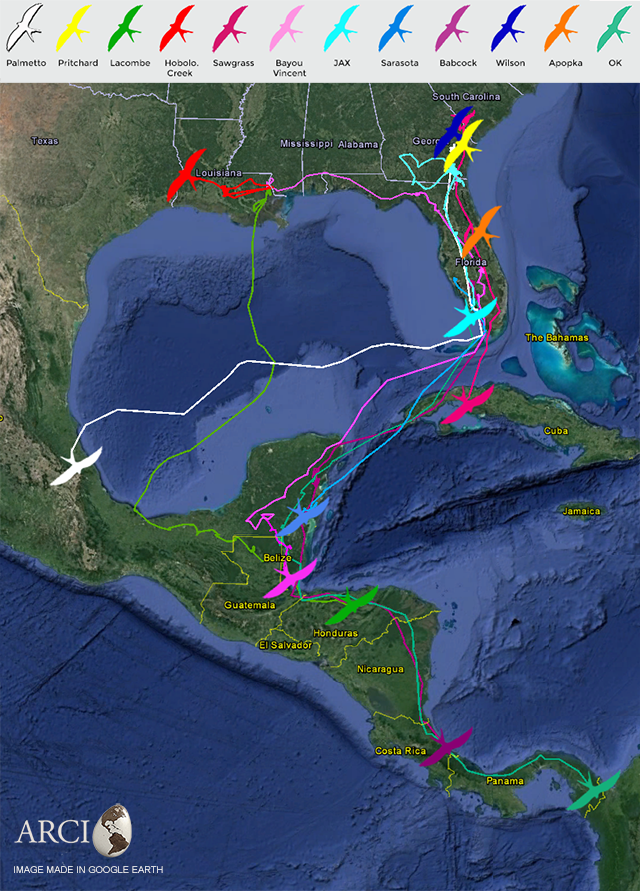 Okaloacoochee (OK): Tagged in Collier County, Florida, in June 2018. OK was the first tagged kite to start migrating south, crossing over the Florida Keys on 7 July. It safely reached the Yucatan Peninsula after crossing over the western tip of Cuba and is currently in Panama.

Bayou Vincent: Tagged in 2018 in Louisiana by our project partner Dr. Jennifer Coulson, President and Conservation Chair of Orleans Audubon Society. Bayou Vincent was second to show migratory movements, but unexpectedly flew east through Florida, skirted Cuba, and reached the Yucatan Peninsula on 28 July. Bayou Vincent is now in Belize.

Lacombe: Tagged in July 2015 by our project partner Dr. Jennifer Coulson. On 25 July, Lacombe left Louisiana just west of the Mississippi Delta and flew due south for three straight days across the Gulf of Mexico. He spent a few days in Guatemala and is now halfway through Honduras.

Babcock: Tagged in June 2017 at Babcock Ranch Wildlife Management Area in Glades County, Florida. She chose a more traditional route and left peninsular Florida on 28 July, crossed Cuba and reached the Yucatan Peninsula in Mexico on 30 July. Babcock lingered there briefly and is now in Costa Rica.

Palmetto: Tagged in June 2011 at Palmetto Bluff, South Carolina. We have followed her longer than any other Swallow-tailed Kite. Palmetto moved to Georgia in July and on 4 August, decided it was time to fly south. She traveled down peninsular Florida almost to the Florida Keys, but instead of continuing towards Cuba, Palmetto was likely blown westward until she landed east of Mexico City on 10 August.

Sarasota: Tagged in June 2017 at T. Mabry Carlton Preserve in Sarasota County, Florida. Sarasota left North Port, Florida, on 3 August and headed towards Cuba. He passed over the western coast of Cuba and is currently in Quintana Roo, Mexico.

Sawgrass: Tagged in June 2016 at Sawgrass Lake Park in St. Petersburg, Florida. She moved from her nesting area in St. Petersburg to South Carolina in July where she remained until 6 August. Over the last week she has traveled through Florida and is currently east of Havana, Cuba.

Wilson: Tagged in June 2017 at Palmetto Bluff, South Carolina. He is currently still in that area.

JAX: Tagged in July 2018 in Jacksonville, Florida. JAX spent some time near Waycross, Georgia, in July but left the area on 7 August. As of 13 August, JAX is near Marco Island, Florida.

Apopka: In June 2017, Apopka was rehabilitated at the Avian Reconditioning Center (ARC) in Apopka, Florida, after a car collision and received a transmitter before he was released. Apopka is still in Central Florida.

Hobolochitto Creek: Tagged in 2018 in Louisiana by our project partner Dr. Jennifer Coulson. Hobolochitto has recently moved west from near Picayune, Louisiana, to the Louisiana-Texas border near DeRidder, Louisiana.

Pritchard: Tagged in July 2018. Pritchard likely nested very close to Palmetto and Wilson in Palmetto Bluff, South Carolina, and is currently still in the area.

NOT PICTURED ON THE MAP:

Bogue Falaya: No longer transmitting. Bogue Falaya was tagged in May 2017 by Dr. Jennifer Coulson, who observed him since the transmitter quit and confirmed is alive and well.