All migrating Swallow-tailed Kites we have tracked since 1996 have crossed the Andes Mountains from east to west in western Colombia before continuing northward. In Colombia, the Andes Mountains consist of three major ridges: the Cordilleras Oriental (eastern), Central, and Occidental (western). On 26 February 2018, MIA and Babcock were over the Cordillera Occidental on their way to Panama. 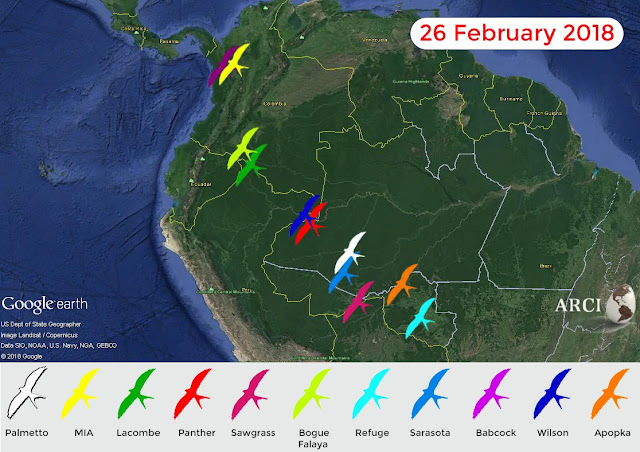 Bogue Falaya and Lacombe were approaching the Cordillera Oriental in southern Colombia. Wilson and Panther were on the border of Peru and Brazil. Palmetto had surged ahead of Sawgrass, Apopka, and Refuge to join Sarasota in the state of Amazonas, Brazil.

Sawgrass left her wintering grounds on 2 February and was just north of the Bolivian/Brazilian border. Apopka had moved slightly north in the state of Rondônia, Brazil.

Refuge has not sent data in a few weeks. Why does this happen? We use transmitters with two different types of data-delivery methods: one where the data comes to us through satellites; and another that uses the cellular network. Refuge is being tracked with a solar powered GPS/GSM (cellular network) transmitter made by Ecotone Telemetry, Inc., which needs to be within range of a cell-phone tower to upload the data. When a bird is beyond range, the unit stores daily GPS locations until its signal can be picked up by a cellular tower. This is happening right now as the birds are crossing through the great Amazon basin and over the Andes Mountains. Sawgrass, Panther, Sarasota, Babcock, Wilson, and Apopka also are tracked by GPS/GSM transmitters.

MIA, Palmetto, Lacombe, and Bogue Falaya are being tracked by solar powered GPS/satellite transmitters made by Microwave Telemetry, Inc. These units upload data to satellites, always within transmission range, every 2 days, and store GPS locations in the off day while the transmitter recharges, resulting in essentially continuous data delivery.